QMK has the ability to control RGB LEDs attached to your keyboard. This is commonly called underglow, due to the LEDs often being mounted on the bottom of the keyboard, producing a nice diffused effect when combined with a translucent case. 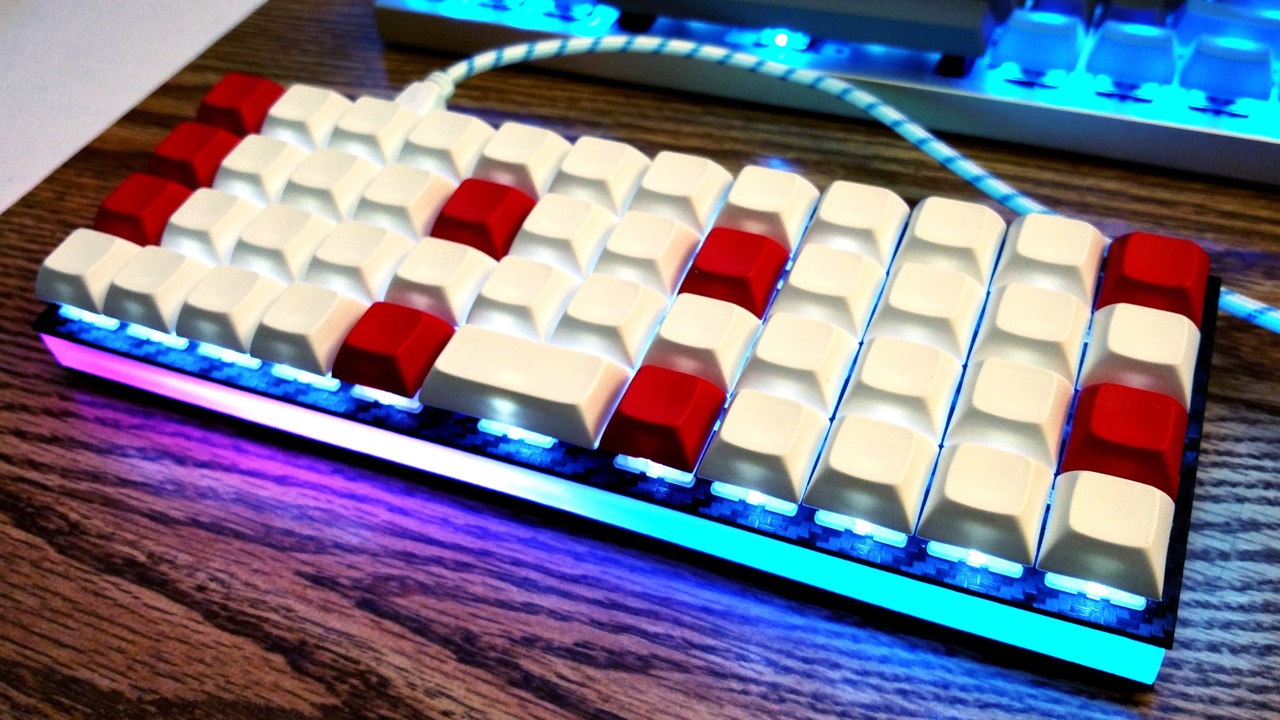 Some keyboards come with RGB LEDs preinstalled. Others must have them installed after the fact. See the Hardware Modification section for information on adding RGB lighting to your keyboard.

Currently QMK supports the following addressable LEDs on AVR microcontrollers (however, the white LED in RGBW variants is not supported):

These LEDs are called “addressable” because instead of using a wire per color, each LED contains a small microchip that understands a special protocol sent over a single wire. The chip passes on the remaining data to the next LED, allowing them to be chained together. In this way, you can easily control the color of the individual LEDs.

On keyboards with onboard RGB LEDs, it is usually enabled by default. If it is not working for you, check that your rules.mk includes the following:

At minimum you must define the data pin your LED strip is connected to, and the number of LEDs in the strip, in your config.h. If your keyboard has onboard RGB LEDs, and you are simply creating a keymap, you usually won’t need to modify these.

Then you should be able to use the keycodes below to change the RGB lighting to your liking.

QMK uses Hue, Saturation, and Value to select colors rather than RGB. The color wheel below demonstrates how this works.

Changing the Hue cycles around the circle.
Changing the Saturation moves between the inner and outer sections of the wheel, affecting the intensity of the color.
Changing the Value sets the overall brightness.

Your RGB lighting can be configured by placing these #defines in your config.h:

Not only can this lighting be whatever color you want, if RGBLIGHT_EFFECT_xxxx or RGBLIGHT_ANIMATIONS is defined, you also have a number of animation modes at your disposal:

Check out this video for a demonstration.

Note: For versions older than 0.6.117, The mode numbers were written directly. In quantum/rgblight.h there is a contrast table between the old mode number and the current symbol.

The following options can be used to tweak the various animations:

You can also modify the speeds that the different modes animate at:

Here is a quick demo on Youtube (with NPKC KC60) (https://www.youtube.com/watch?v=VKrpPAHlisY).

If you need to change your RGB lighting in code, for example in a macro to change the color whenever you switch layers, QMK provides a set of functions to assist you. See rgblight.h for the full list, but the most commonly used functions include:

These are shorthands to popular colors. The RGB ones can be passed to the setrgb functions, while the HSV ones to the sethsv functions.

These are defined in rgblight_list.h. Feel free to add to this list!

Changing the order of the LEDs

If you want to make the logical order of LEDs different from the electrical connection order, you can do this by defining the RGBLIGHT_LED_MAP macro in your config.h.

Normally, the contents of the LED buffer are output to the LEDs in the same order. 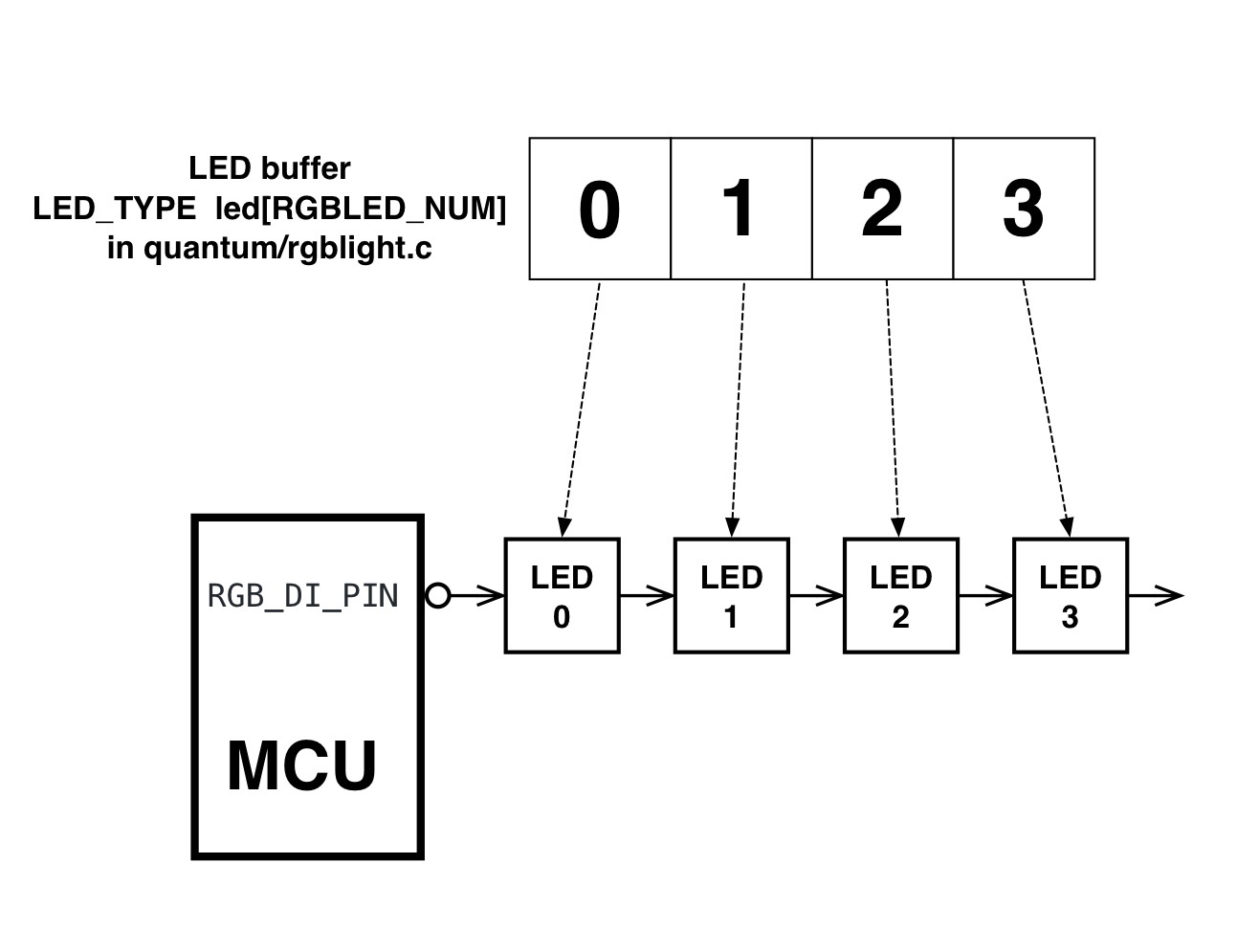 By defining RGBLIGHT_LED_MAP as in the example below, you can specify the LED with addressing in reverse order of the electrical connection order. 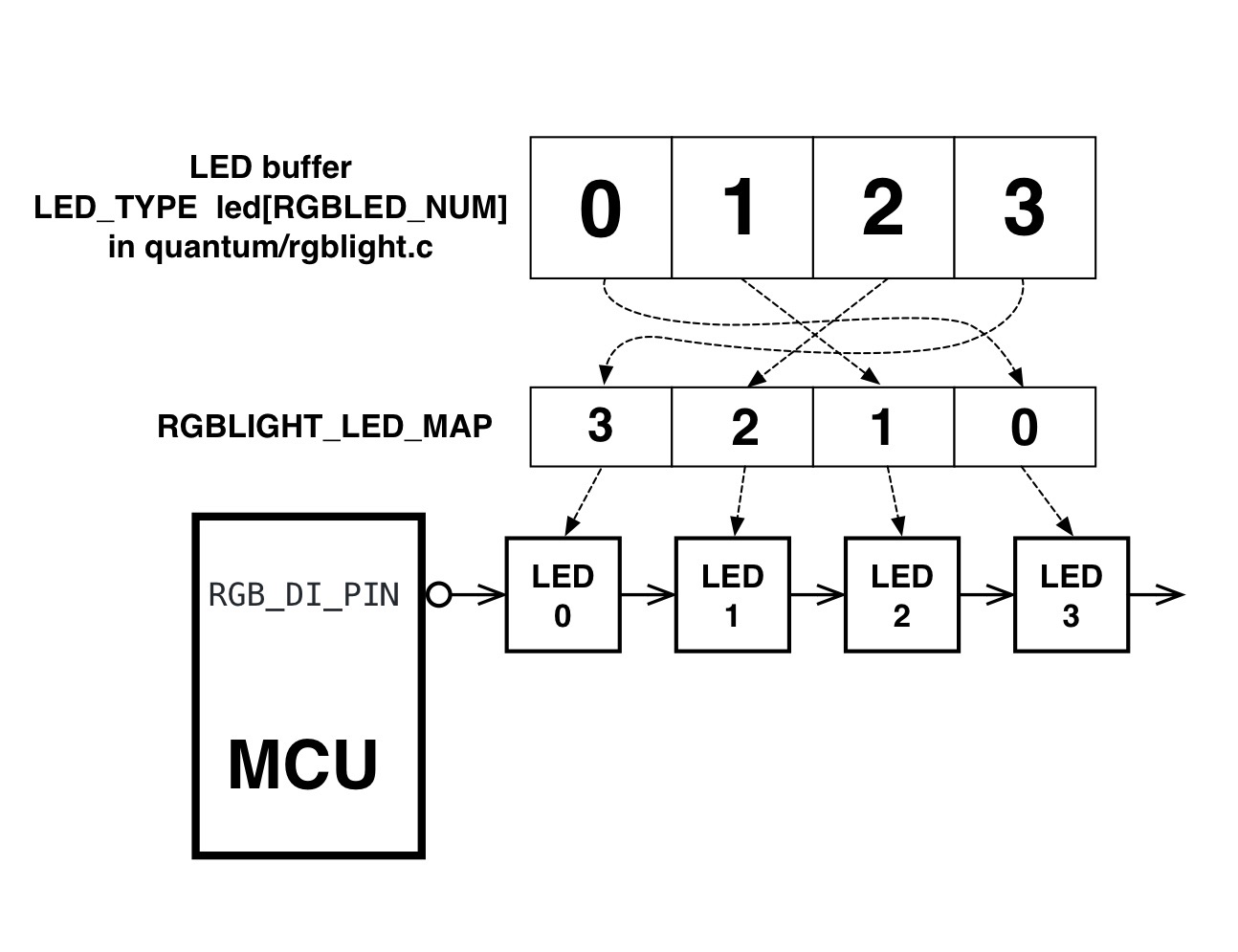 For keyboards that use the RGB LEDs as a backlight for each key, you can also define it as in the example below.

Using the rgblight_set_clipping_range() function, you can prepare more buffers than the actual number of LEDs, and output some of the buffers to the LEDs. This is useful if you want the split keyboard to treat left and right LEDs as logically contiguous.

You can set the Clipping Range by executing the following code. 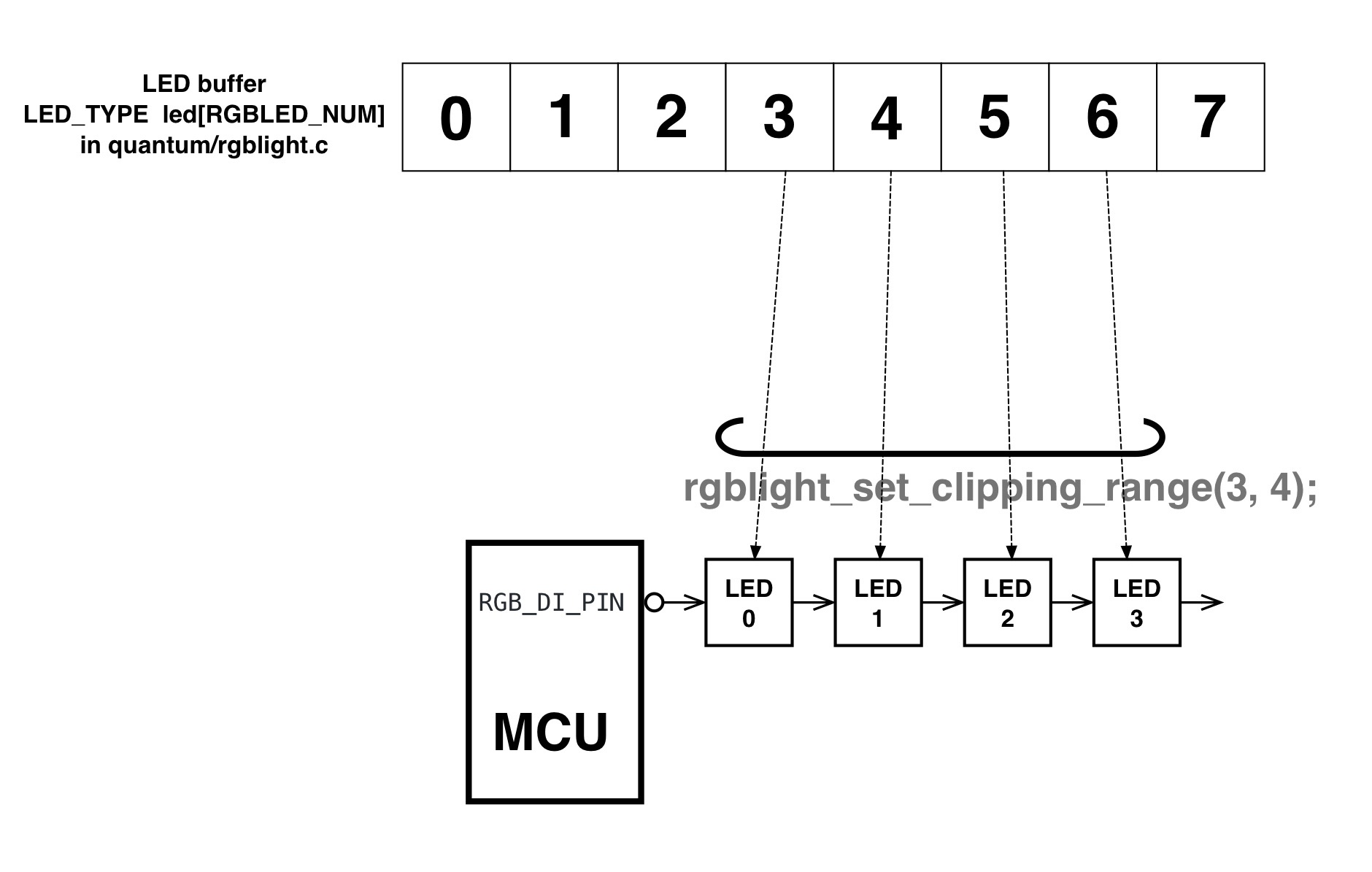 In addition to setting the Clipping Range, you can use RGBLIGHT_LED_MAP together. 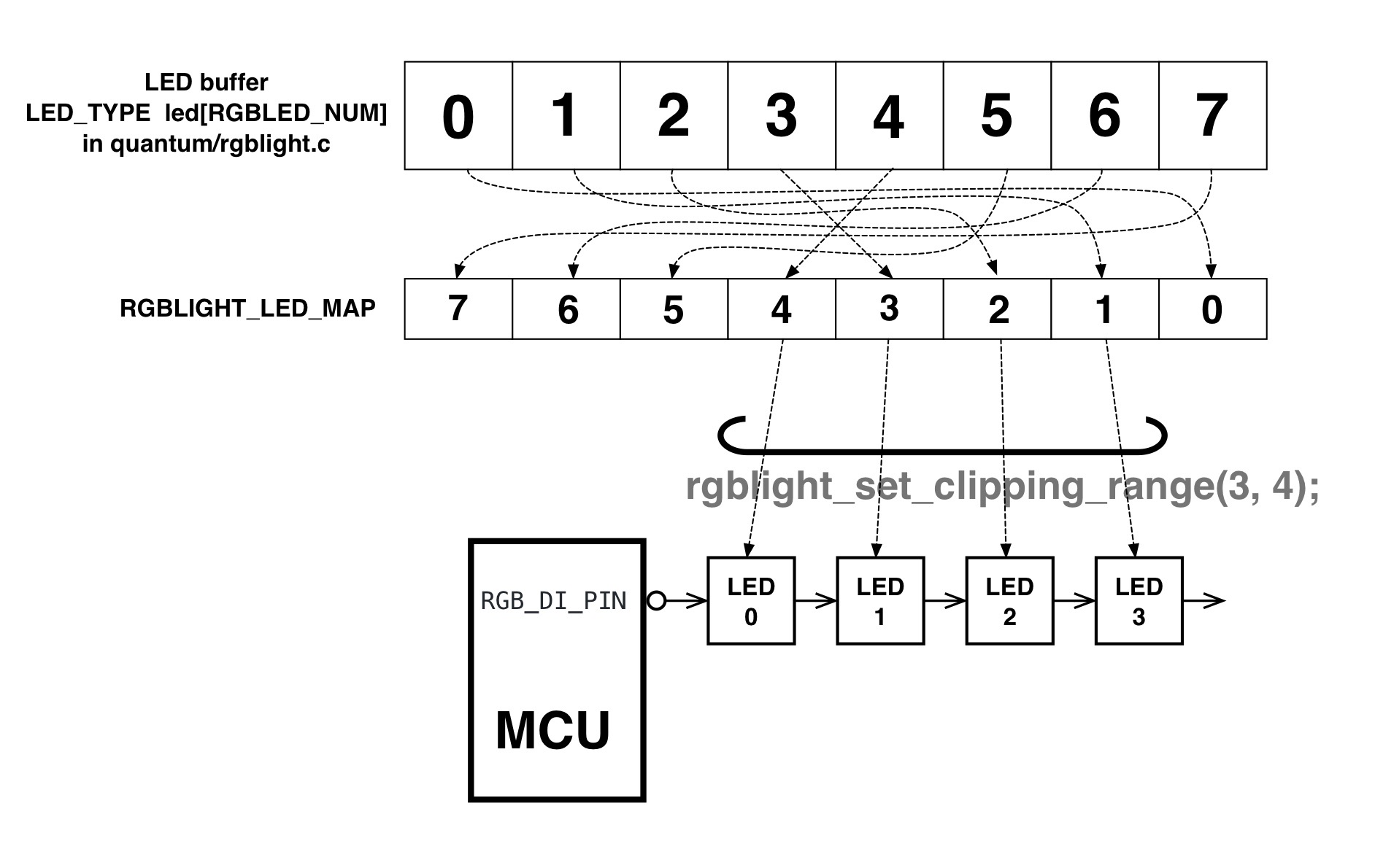 If your keyboard lacks onboard underglow LEDs, you may often be able to solder on an RGB LED strip yourself. You will need to find an unused pin to wire to the data pin of your LED strip. Some keyboards may break out unused pins from the MCU to make soldering easier. The other two pins, VCC and GND, must also be connected to the appropriate power pins.